This past Saturday evening the vegan and I set out on a hill country dining excursion with the hope of discovering a new gem in the Lake Travis area.  Kellie had heard about a new restaurant on 620 called 827 Rays KITCHEN + CELLAR so, with the trusty Open Table app in hand, we set off to enjoy an evening in the Texas hill country.  Open Table informed us that, though the restaurant could accommodate us upon arrival, we would be dining al fresco.  As neither the vegan nor I is against dining under the stars on a pleasant April evening, we were happy to follow the host to our patio seating when we arrived.  As we sauntered through the thoroughly packed dining room, it occurred to me that we might be in for a quality experience because the smells coming from the kitchen were quite appealing.  I was anxious to get started!

We were the only patrons on the patio and were allowed to choose whichever table we preferred.  We chose a table nestled under a large Texas Oak, and just the right distance and wind direction from a small fire-pit that was recently lit and beginning to illuminate the darkening patio area.  It was quaint.  We started with the Grilled Shishito Peppers.  This was the only appetizer on the menu that vegans and carnivores could share, so it was out of necessity that we chose the dish.  I had never had grilled Shishito peppers before, and I don’t know why that is.  They were quite tasty.  There was a smokiness that really complimented the tangy, if not spicy peppers.  It reminded me of snap peas or edamame but was far more flavorful than anything you would get in a sushi bar.

As for the entrée, I struggled a bit with this one.  Our waiter, Eric, recommended the ribeye or the strip when I inquired about the steak options. Fine choices, I’m sure but I was looking for something a bit different from the standard steak that I normally lean toward.  To my knowledge, I have never had a Beef Shoulder so I decided to give it a try.  I don’t exactly know what I was expecting but it turns out that a cow’s shoulder tastes a lot like the rest of the cow.  It was a savory cut of beef and, within about seven minutes, the plate was empty and my belly was full. I was sated and satisfied that we would return for another meal.  827 Rays was definitely trending upward, in my opinion.

I would be remiss if I didn’t share the most impressive thing about the evening.  It has nothing to do with the food, or even about carnivores and vegans dining together.   It has to do with service.  I’m a stickler for good service so, when I see examples of exemplary service, I have to call it out.  You recall that I mentioned the freshly lit fire pit a minute ago.  Well, the fire pit was humming along quite nicely after a while, and patrons were continuing to file into the patio area.  Eventually a family was seated directly in front of, and downwind of, the fire pit.  The children in the party were struggling with the smoke from the pit and it was apparent that it was making the meal a bit less enjoyable than it should be.  Within a few minutes two servers walked into the area, doused the fire pit with glasses of water, and removed the fire pit altogether.  They hoisted the fire pit above their heads and quietly moved it (still smoldering) to the area behind the venue.  I was impressed that these gentlemen opted to put their guests experience above the ambiance that the fire pit created for the other tables on the patio.  And, as far as I could tell, they did it without the guests having to ask for it to be moved.  Chalk one up for customer service!

With regard to carnivores and vegans dining together in harmony, 827 Rays KITCHEN + CELLAR fared pretty well.  While they didn’t have a ton of options for the vegan, they did have a couple choices that she enjoyed.  I am hopeful that, after reading this post, Chef Brooks will feel compelled to reinforce his menu to include a couple more options that the plant eaters would enjoy.  With a pedigree as impressive as his, I am certain that he has some tricks up his sleeve.  I’m so confident in fact that I bet he could go so far as to have an “off menu” vegan option for any plant killers that stop in on any random night.  But I am a gambler after all.

827 Rays KITCHEN + CELLAR scores a very respectable three cow faces from this carnivore.  I appreciate the chef’s effort to bring quality and delicious fare to the Lake Travis area.  We will be back soon.

🍠🍠🍠
Hello again!  We really try to get to a new post each week but 2017 is shaping up to be a busy one and since this isn’t yet our day job, we still miss from time to time.  Missing but not forgotten!  And this week we ventured out to somewhere “New and Hot” as OpenTable suggested.  It was Saturday night and you in Austin know it happened to be beautiful weather.  I put on a dress not knowing our plans and apparently that was enough to make sure we went out.  After some deliberation and research we decided to take the app’s suggestion and made our way to the new 827 Ray’s Kitchen + Cellar. 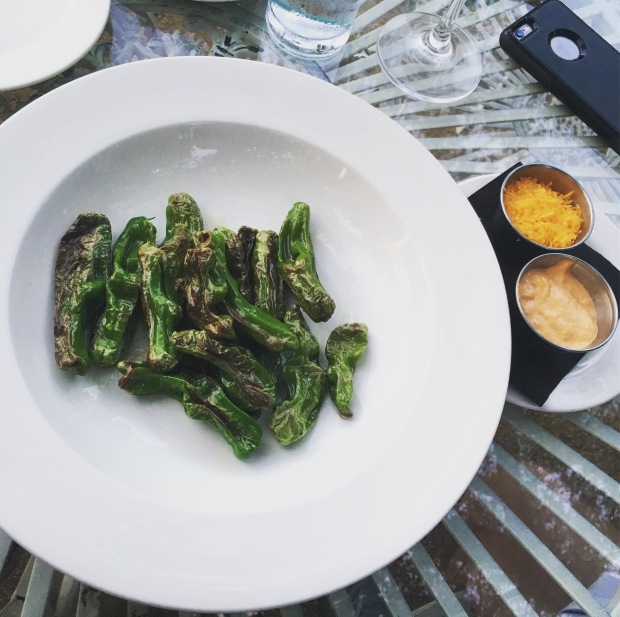 OpenTable did clarify that there were only outdoor seats available so when we arrived we were seated on the patio.  We did enjoy seeing the inside if not just to walk through – very clean, stylish and inviting.  The patio was charming as well which included a fire pit (more about that later).  We sat and ordered wine straight away.  We also informed Eric, our waiter, about our special dining needs.  He didn’t bat an eye as he pointed out the menu item I could order as well as an appetizer that could be accommodated for both of us.  He also gave the carnivore some suggestions and answered his questions though I assume he will share more about that in his portion.

We started with the shishito peppers which they served with the aioli and cheese on the side.  The menu didn’t quite match what is online; however I believe that is likely due to its farm to table nature, serving seasonal ingredients and such.  The peppers were well cooked and would probably be perfectly seasoned with the addition of cheese and sauce but I simply salted them lightly and was very satisfied.

For my main course, I ordered the spaghetti squash that was covered with assorted vegetables such as balsamic roasted Brussels sprouts, mushrooms and cherry tomatoes.  This dish also had some non-vegan items (pesto and cheese) but they brought it out completely vegan.  Not only was that a treat but the vegetables were cooked to perfection and the flavors were delicious.

Overall I give 827 Ray’s a solid three rutabagas.  They were amazingly accommodating not only with my needs but any patron.  At some point the fire became too smoky and the poor diners sitting nearest to it were obviously distressed.  Our waiter and another immediately put out the fire and moved the entire pit away from the area!  Now that is customer service.  My only suggestion for 827 Ray’s is that they continue to come up with more menu items (besides just one) that might appeal to the vegans.  Perhaps something with a bit of protein for more satiation – beans, chickpeas, etc. – again whatever is in season and delicious.  That said, we will definitely return.